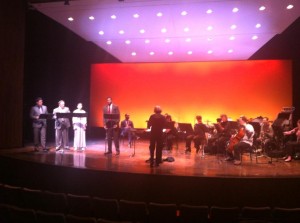 CAST
Malachi Harris (baritone)
Phillip Duffy (bass)
Catherine Burns (soprano)
John Burns (tenor)
John Ruddy (tenor)
ENSEMBLE
flute, clarinet/bass clarinet, french horn, string quartet, piano, percussion
Duffy’s Cut(2013) was commissioned by the Washington National Opera American Opera Initiative, and was premiered in the Terrace Theatre at the Kennedy Center on November 13, 2013. Her writing was praised as showing a “flair for full-bodied, operatic sound,” (Washington Post), and “using contrasting rhythms and clever harmonies to an intriguing effect” (Huffington Post).
“The appearance of this fatal malady in our favoured country is calculated to awaken the most serious reflections, and to excite the mind to close self-examination. That is a dispensation permitted to a wise and gracious Providence as a chastisement for the sins of the people, and as a solemn warning to repent and amend their ways,
I have not the smallest doubt.” —June 30, 1832; The Friend, a Quaker newspaper
“All were intemperate, and ALL ARE DEAD! The house, or rather hovel, in which they lived with all its contents, was burnt immediately after the bodies were buried.”
—September 8, 1832; The National Gazette and Literary Register
TIME
Late August, 1832.
SETTING
The work camp of Track Mile 59, known as Duffy’s Cut, in rural Malvern, Pennsylvania. The ground is scarred from the effort of cutting away the hillside and creating a fill, or land-bridge, over the valley below for the Pennsylvania and Columbia Railroad. Some yards away from the worksite, the door of the Irish workers’ abandoned shanty flaps desolately in the late summer breeze. The tools of their labor—a wagon half-filled with dirt, shovels, and pickaxes—as well as the sundry remains of their daily lives—bone pipes, tin cups, empty whiskey bottles—lie scattered, forsaken, over the ground.