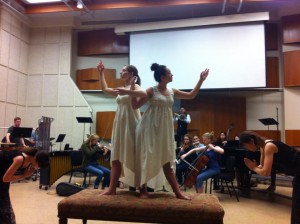 Synopsis of First Act
The Narrator introduces Christabel, the young, pure, and beautiful daughter of Sir Leoline, as she is walking by herself in the forest close to midnight. Suddenly, she notices a woman lying in the forest in distress. The woman introduces herself as Geraldine, and after explaining to her that soldiers kidnapped her and then left her in the forest to die, she persuades Christabel to take care of her in her father’s castle. As she is traveling back with Christabel, weird events occur that foreshadow Geraldine being evil: she shrieks in pain as she crosses the threshold of the gate, the dog barks at her, and when they arrive to Chrstabel’s bedroom, she starts casting a spell on her. The first act ends with Chistabel unrobed and lying in bed next to Geraldine.
Excerpt of the end of Act 1:

Synopsis of Second Act
It is the next morning, and Christabel and Geraldine are waking up. Christabel brings Geraldine to her father, Sir Leoline. She then recounts the story to her father about who Geraldine is and how she was found. Sire Leoline realizes that Geraldin’es father has been a friend of his, but long ago, after a horrible altercation, they stopped speaking. Sir Leoline feels sorry for Geraldine, and out of respect for his old friend, and possibly out of remorse, wants to make sure Geraldine is taken care of and escorted back to her father. He summons his knight, Bard Bracy, to accompany Geraldine back to the castle. However, Bard Bracy tells Leoline of a horrible premonition he had last night: that a beautiful dove was being strangled in the forest by a snake. Sir Leoline is so enraptured by Geraldine at this point that not only does he think the dove is Geraldine, but he also does not notice that Geraldine is casting a spell on Christabel, causing her to act strange, jealous, possessed, and snake-like. Sir Leoline is so disgusted, and ashamed of his daughter’s actions that he walks out of the room with Geraldine, while Christabel is on the floor coiled up and hissing.