March 13-16, soprano Emily Woodruff flew to Las Vegas to perform my composition From My Doleful Prison that was premiered at the Composers Now Festival in February on her showcase titled “The Queens Speak.” 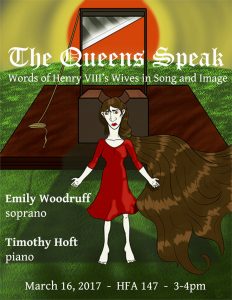 “The Queens Speak” is a multimedia concert pairing contemporary art song with projected imagery to narrate the lives and experiences of King Henry VIII’s wives. Premiered last month in NYC in the Composers Now Festival, the program features photography, graphic novel-style illustrations, ink and watercolor, and oil on canvas, paired with music by Jennifer Bellor, Devin Cholodenko, George Gianopoulos, and Libby Larsen. Each composer set letters written from the Tudor Queens. In addition to her performing it at the UNLV Nextet Concert on Wednesday, March 15, she presented the entire showcase Thursday afternoon at UNLV.

Here is a video recording from the performance: 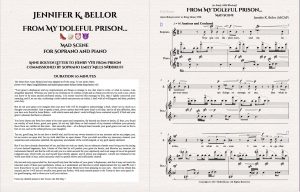 Paired with artwork by Dustin Brown, From My Doleful Prison sets the letter Anne Boleyn supposedly wrote to her husband Henry VIII while she was in prison awaiting execution. 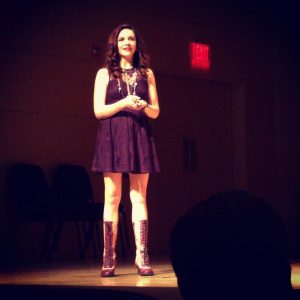 When I first read the letter, I knew I wanted to create a mad scene, since she is angry, confused, anxious, and filled with all sorts of emotions one would have when in a situation where one is wrongfully accused and sentenced to death for crimes that she may not even have committed. In addition to the soprano and piano parts, I used Logic samples to create a present day atmosphere that one might experience sitting in a jail cell. One would hear footsteps of prison guards approaching on a regular basis, along with clanging of the metal bars, people yelling, and even abstract sounds that one might experience in electrocution chambers. This sounds are ongoing throughout the entire piece to represent the fact that even after communicating the letter in song, the sounds will never stop, and the prisoner is still hopelessly stuck in a state of oppression sitting there in her jail cell.

The performance was thrilling! Joining her on piano was UNLV faculty pianist Tim Hoft. 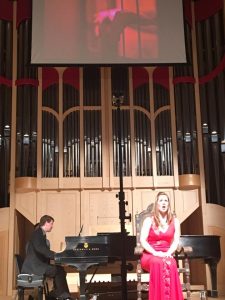 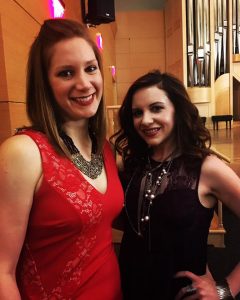 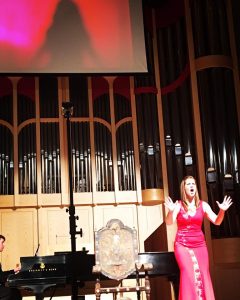